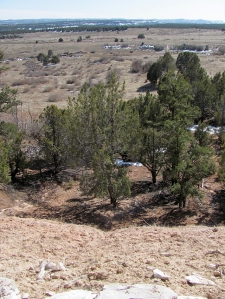 Looking down on the plain and stream bed from the ridge. Stones in foreground were part of a dwelling.

My brother lives in Utah and each time I visit him I stop on some private land not far from his home and look for potsherds and arrowheads. The property was apparently home to a small community of Native Americans several centuries ago. It’s a nice piece of property with  a ridge and southern exposure. About 30 feet below the ridge is a small plain and stream bed. On the ridge are the remains of six or seven stone dwellings. Now the stones (about a foot in diameter) are scattered around the ridge or have slid down the slope.

I could spend hours looking for these artifacts. I find the time relaxing and, at the same time, thrilling. Relaxing since there is no time constraint. Thrilling since finding means I can hold something in my hand that was made 300, 400 maybe 500 years ago. Who made them, I wonder? Was it a man or woman? What were they thinking as they worked? Were they as relaxed as I am or were they worried about invaders, the weather or starvation? What was their life like? What ultimately happened to them as individuals and to the community they lived in? One can picture them sitting on the ridge in front of their dwellings looking down at the stream as they worked, turning clay into pots or flint to turn it into weapons or tools. 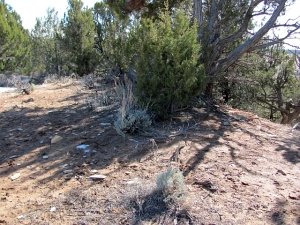 A look across the ridge.

I don’t keep what I find. I used to do so but now the fun is in the finding and holding, not the holding and keeping. So I pick the items up, look at them, then toss them aside and walk on. Plus, it’s not like the artifacts are rare. There are literally thousands of fragments lying around the two- or three-acre site, and most of what I find is not larger 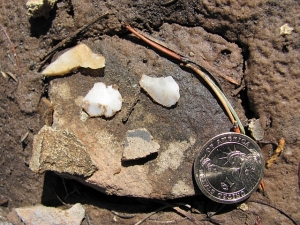 Just a few of the items (potsherd and flint) found on the ridge or that are sliding down to the plain. Note the black paint on the one pot sherd. Only a few of the pieces show evidence of having been painted.

than a dollar coin, although sometimes I do find the remains of a clay pot several inches in diameter. Any complete or nearly complete pieces were probably scrounged by others over the intervening centuries. I leave the potsherds because there is little I can do with them. Additionally, leaving them means maybe others will be able to the same fun I have. Oh, and the property I am on may be open to visitors but that doesn’t mean what is on the site is anyone’s property to take, and I’m not about to push my luck and find out.

However, what if I were to find a complete bowl or a complete arrowhead on the site? What then? Would I put it back–or would I keep it?  Do I have ethics but only to a degree? Am I like the women in the joke who, when asked by a man if she would have sex with him for a million dollars, thinks about it before saying yes. When asked by the same man if she would do the act for a dollar instantly answers no and then asks in disgust, “What do you think I am?” To which the questioner responds, “We’ve already determined that’ now we are just quibbling over price.”

In Michigan, our Indian history is not so obvious and not as abundant. I’ve always wanted to find evidence of early Indians but never have. That’s not surprising. First of all, mid-Michigan didn’t have the large number of Indian communities that one finds in the desert southwest, and the remains of any communities we had are either buried many feet below ground or have been plowed over.

In Clare County, for example, there is little evidence of permanent communities. Archeological studies have found sites but most were temporary in nature and most have disappeared over the intervening centuries. Same with Indian mounds. There are still a few mounds in Missaukee County but none in Clare that I am aware of.