Gerrish and His Logging Railroad (Part 1 )

…Or How to Decimate a County in a Decade

Fellow Clare County Historical Society member Jon Ringelberg sent me a June 1878 article from The Clare County Press concerning Winfield Scott Gerrish, the first lumberman to purchase a railroad (locomotive, car assemblies, track, spikes, etc.) and bring them into Clare County for the express purpose of hauling timber out of the woods. Others had used trains before for that purpose, but not in Clare County. An excerpt of the article appears in the post following this one.

One of the things that makes this such a wonderful article is that it is a first-person account written and only a year or so after Gerrish brought his logging railroad to Clare County. And at a time the county was getting ready to experience an explosive building boom and population growth.

Gerrish got the idea of using a train while visiting the Centennial Exposition (World’s Fair) in Philadelphia in 1876. In one of the halls he saw a locomotive that ran on a narrow-gauge track, and thought it would be a good way to get cut timber out of his holdings that were located far from any river. (Rivers were needed at the time as they were really the only good way to transport logs to market or to major railroads.)

Whether Gerrish knew others had used a train for a similar purpose is not known. What is known is that the train arrived at the opportune time for Gerrish who was on the verge of bankruptcy. He was finding that the cost of cutting and transporting his timber holdings was higher than the revenue he was receiving.

Another factor was that the Pere Marquette railroad was laying track through the county at the time, from southeast toward the northwest. This meant it was now far easier to bring men and supplies into the county and to haul timber out of it.

Other area lumbermen initially scoffed at this train idea; however, they were just as quick to follow Gerrish when they found he was getting rich. Why did he make money? The railroad allowed Gerrish to cut and transport lumber year around instead of just during the winter months. That meant a steady and continuous revenue stream all year long.

Using trains allowed Gerrish to cut and haul logs from wherever he could lay track. And he was able to get them from woods to market in under a week, a marvelous feat at the time. Of course, there was an initial expense and delay before a train could run, since the locomotive had to be brought in, a railroad bed built, ties and track laid, and rail cars built. However, this work was generally done quickly and, in the case of the tracks, without regard to quality, since they were temporary, having to last just a couple of years, at best. 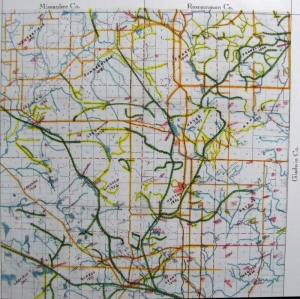 Many of the railroads that once covered Clare County. Green is used for major rail lines. Other colors show the beds of some of the narrow-gauge logging railroads. Map courtesy of Mr. and Mrs. Vanderbrink.

So the logging trains came in and the trees came out. In his book, Michigan Ghost Towns, author Roy Dodge estimated that there were more than 300 miles of logging railroads in the county and traces of many can still be found.

Note: Some articles (including the Gerrish link above) claim Gerrish was the first in the world to build a logging railroad. He was not. They were used in other states including Michigan decades before.

One thought on “Gerrish and His Logging Railroad (Part 1 )”