A Lake Dock that Rises into the Sky

The Lake Coal Dock as seen from the west. A paved biking, walking and snowmobile trail is adjacent. Inside the trees to the left is the building and storage pit.

The biggest dock in the small resort town of Lake doesn’t extend into the water, but reaches into the sky. This dock is also made of concrete and stands on four relatively spindly legs that are long enough for a train to pass through them.  One can see this dock from a distance, as it stands some 75 feet above the surrounding flat terrain.  The structure is especially impressive if one is on the Pere Marquette State (Rail) Trail and headed either westward from Farwell or eastward from Evart toward Lake—formerly Lake Station—in southwest Clare County.

The structure is a coal dock and it sparks wonder in most who view it, especially those seeing it for the first time.  It’s also a piece of railroading history.

Coal docks, also called a coal towers or coal tipples, were once common and were built to supply coal to the many steam locomotives that once plied railroad tracks, not only in Michigan but around the country.  These docks were built either next to or directly over the tracks so that trains in need of fuel (used to heat their boilers) could stop briefly to reload. Coal would be fed by gravity into the coal cars and the train would then speed on.  Coal trains would supply the docks on a regular basis.  the black fuel would generally be unloaded and stored in an underground pit and then would be loaded into the dock using an elevator with a bucket or other apparatus.  These docks operated until diesel replaced coal as a fuel and these docks were no longer needed. The changeover started prior to the Second World War and then accelerated rapidly once the war was over. By the early 1950s, coal docks were dinosaurs and most were torn down.  In Michigan, only 17 survive. The coal dock in Lake is one of them—and its days may be numbered, as well.

Photo of Lake Station taken about 1930. The coal dock is in the distance. The photo was taken from a water tower since dismantled. The  Lake railroad depot is in the white building in the center of the picture.

The Lake coal dock was built in 1929 and could hold five railcars worth of coal (approximately 250 tons) with more stored underground. The timing for building this dock is puzzling given the changes that were already taking place in railroading and the fact that steam locomotives had been plying this same track for decades; however, the tower might have been planned years earlier, but was delayed until Consumers Power—the local utility—could extend lines to Lake to supply electricity to the winch that would raise the coal buckets to the tower. Power finally came to Lake in the later part of the year, according to an article* in Aug. 16, 1929 issue of The Clare Sentinel.

The dock was engineered by Robert and Schaffer, a firm out of Chicago. Ralph Stewart, a Lake resident who has researched the tower, has sales materials  showing many of the coal and sand docks the firm designed and sold, although none shows the exact Lake coal dock. (Sand was used on tracks to provide traction in winter weather. However, there is no evidence the Lake tower included sand for trains.) 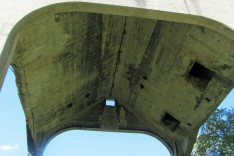 How exactly how this particular coal dock worked is unknown. While some metal connectors are still visible on the tower, the elevator and chutes are all gone.  Also gone are the engines that powered the elevator and all equipment that may have been in the building used by employees that is adjacent to the tower. It appears the elevator would have passed through one of the rooms.

According to William Scott who grew up in Lake in the 1950s and played around the tower as a child, a railroad siding once ran directly under the coal tower; however, those tracks were taken up long ago.  Mr. Scott does not remember the elevator or other equipment being on the dock.  Although it’s only speculation, it does not appear the siding was used by trains to load up on coal, only to deliver it.  The tracks used by passenger and freight trains running between Saginaw and Ludington were removed in the 1990s and the grade turned into a rails to trails pathway within the last decade.

The land on which the coal dock sits is now owned by the Michigan Dept. of Natural Resources.  The rail-trail itself, which runs approximately 60 miles between Midland to Reed City is popular with cyclists, runners and walkers in the spring, fall and summer and with snowmobilers in winter.  Unfortunately, the building appears to be a hangout for nearby youth and is littered with furniture and trash. Campfires appear to be a popular use of the rooms. The walls are also covered in spray-painted graffiti.  Because of the dock’s condition and its use (or misuse), one recent letter to the editor in the The Clare County Review called for the “crumbling structure” to be torn down.

That would be a shame.

To help make sure that does not happen, some members of the Clare County Historical Society have proposed working with those in Lake seeking to save the coal dock and buildings.  One idea involves getting permission from the DNR and Village of Lake this spring to clean up the area: cutting down the undergrowth that keeps the buildings hidden from view; picking up the trash; perhaps whitewashing the buildings to hide (at least temporarily) the graffiti; and blocking the entrances.

On a personal note, one of the things I like to do with visitors is to take them for a ride the Trail from Farwell toward Lake and back.  I don’t tell them about the coal dock, but I make sure I am nearby when they spot it for the first time.  I never fail to enjoy their puzzled expressions and their questions.  And invariably, they pick up the pace after they’ve spotted it to see just what it is.  Right now, there is nothing to tell them.  We hope to someday change that too with a state historic maker.  But first we want to make sure the Lake coal dock is around a long, long time.

Note: If you have any photos of the dock in operation, have additional information (or corrections to what I’ve posted here) or would like to get involved in this project, please contact me. I’m hoping this blog post is JUST a start.

* NEW COAL DOCK COMPLETED AT LAKE The ‘Pere Marquette railroad company have just completed a concrete coal dock at Lake Station that has a capacity of five cars of coal. It is reported that the dock as well as a new pumping station that is expected to be installed will be run by electricity as soon as the new Consumers Power Company’s line is completed to Lake.

3 thoughts on “A Lake Dock that Rises into the Sky”