This is a revised version of an article that appears in Harrison’s 125th Anniversary History booklet written and edited by Angela Kellogg to celebrate the mid-Michigan city’s quasquicentennial that was celebrated in August 2016.  Copies are available for $10 from the Harrison District Library.

In 1879, The Pere Marquette Railway pushed its tracks through to Harrison from Clare.  The railroad was a welcome and needed addition as it connected the growing town and county seat in the wilderness with big cities to the south, like Saginaw, Detroit, New York and Chicago.  These cities and others needed lumber and Clare County towns like Harrison had plenty.  The track was owned and operated by the Pere Marquette Railway, and like most railroads, it owned a 66-foot wide right-of-way, with the tracks down the middle.   Nothing could be developed within that area without permission of the railway and markers on both sides—made of wood at the beginning and later of concrete—marked the boundaries.

Harrison in the late 1880’s. Structures in distance are sawmills. Photo from the Harrison Public Library collection.

While the town of Harrison would become the city of Harrison and prosper, the Harrison rail line would not. Within a decade, the huge pines that had fueled the town and county’s growth, and generated much of the railroad’s revenue were gone.  Cut into boards and hauled south.  Although cutting and transporting ice from Budd Lake (to provide cooling for ice boxes before the days of refrigerators) would help preserve a rail line to Harrison for a while, fewer and fewer people rode the rails and less and less freight was sent by train.  After all, automobiles and trucks were quickly becoming the popular mode of transportation.

In 1944, within the lifetime of some residents who had seen the rails put down in Harrison, they were pulled up.  Over the intervening years, the railroad grade was leveled and the Harrison depot was moved (the Jack Pine Restaurant sits approximately where the depot once stood.  All evidence of a railroad in Harrison disappeared.

Within the city’s boundaries, a handful of small reminders of the railway still remain. They are the concrete Right-of-Way markers placed by the railroad.  Each one is approximately 24-inches tall and 11 of them can be found within the city limits.  All are triangular with the letters P.M.R.Y on one side and R-O-W on a second side.  The marker furthest to the south can be found near the  S & R Diner parking lot on First St (Old 27).  Others can be found other streets in town such as Oak and S. Lake.

Finding them can be an enjoyable adventure. 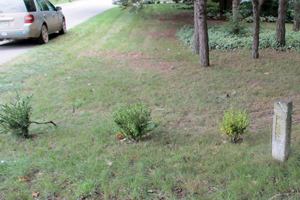 However, it’s important to note that while most are visible from the street, all markers are on private property, so if you wish to see these traces of the past, please be respectful.