Note: This is the first of two posts dealing with the geologic history of Clare County, Michigan, USA.

Ever take a good look at our county?  Its rolling landscape, many bodies of water (20 Lakes in 20 Minutes), numerous gravel and sand pits, the fact that the south end of the county is hundreds of feet lower than the north end.  Ever wonder why it looks the way it does? Why it has so many rocks? So many lakes? And oil?

What we now call Clare County has been around for more than 4 billion years and has physically traveled a long way and has seen volcanos and oceans.  Only recently–in the last 11,000 years of so–has it been in the form we now know it.  If you think of time as a yardstick*–a really long yardstick in this example–with every 1,000 years being an inch and us at one end, Clare County has existed in its present form for about 11 inches, while the land far underneath and around has been in existence for about 66 miles or so. As I said, a really long yardstick. But more on that later.

And while the land has been around for more than 4 billion years, you won’t find any dinosaur bones. Now there is always a remote chance you will find the remains of a mastodon and woolly mammoth in the county (a tooth most likely since those tend to survive because they don’t decay as easily, no pun intended), any traces of dinosaurs were scrubbed way by glaciers and/or buried several thousand feet and under tons and tons (and tons) of glacial till, which is debris from a glacier.

Circles indicate where the remains of a mastodon were found. Most discoveries have been where swamps once existed. The theory is that the animals may have fallen through a mat of vegetation trying to feed, were quickly swallowed by mud and were preserved.

If you do find a mastodon or mammoth (and it more likely to be the former since they have been found in Michigan more often), yours will be the first. That’s because while mastodon fossils have been found in most surrounding counties and mammoth fossils in a few counties, neither has been found in this county. And yes, there is a difference between the two herbivores but no, they are not dinosaurs. Real dinosaurs like your t-rex and triceratops have been extinct for hundreds of millions of years (3 miles on our yardstick), while these elephant-sized, mammals (the largest that we know of in our state) last trod our mitten-shaped peninsula 6,000 to 8,000 years ago (6-8 yardstick inches away), according to scientists who study that kind of stuff.

I learned this from a paper by Margaret Anne Skeels of The University of Michigan, entitled The Mastodons and Mammoths of Michigan, presented back in 1961. And if a mammoth or mastodon remain has been found in the last 54 years, I can’t find evidence of the discovery.

Ms Skeels also wrote that we don’t really know why these critters became extinct, but that it was most likely due to a warming climate.  The same warming that caused the glaciers to retreat to the arctic. While there is evidence that Indians of the Southwest hunted mastodons, we have no evidence that Indians in our state hunted them or were at all responsible for their extinction.

However, let me rewind a bit and talk more about glaciers and ice ages.  I will cover our really distant past (oceans, the equator, formation of oil deposits and more) in Part 2. 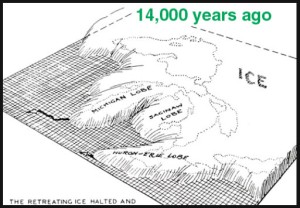 The retreat of last of the four glaciers that covered Clare County. Each glacier sculpted our county and dropped tons of sediment (glacial till), in its wake.

Scientists believe there were at least four glaciers that covered all of Michigan and much of North America over many hundreds of thousands of years, complete with warm periods in-between when the glaciers receded. These ice ages and resulting glaciers were known as the Nebraskan, Kansan, Illinoisan, and the Wisconsinan. Why the earth cooled enough that glaciers from the arctic region expanded to cover all of Michigan and a good part of North America is unknown but it may have to do with long-term variations in the orbit of the earth (Milankovitch Cycles).

And whether we are currently in one of the those “in-between periods” is also unknown; however, it is known that  starting about 1.8 million years ago (150 feet away on our yardstick), at the start of what is known as the Quaternary period, it got cold and it stayed cold and that ice sheets covered all 83 Michigan counties including ours.  The height of those glaciers has been is estimated to be 10,000 feet or more, and the tremendous weight and pressure of the ice compressed the earth as it gouged and shaped the landscape.

While these  glaciers advanced, they captured and transported with it everything in its path from huge boulders to rocks, stones and gravel. That means many of the rocks you see or that farmers have to contend with when they plow, may have come from hundreds of miles to the north where it was transported by the final glacier.

Black lines show the many moraines in our state. The Saginaw Bay region is without moraines because it was until relatively recently (geologically speaking) under water and its moraines have been eroded by wave action or low areas filled in with sand and debris.

The glaciers’ movements weren’t constant and the advances and retreats occurred over 10s of thousands of years (the last glacial age lasted more than 100,000 years). When the Wisconsinan glacier finally retreat for the last time–which means the glacier was melting faster than it was advancing–all the geologic junk contained in the ice was dropped in irregular piles, creating the landscape we now see. Where the glacier was in one place for a longer period of time (decades perhaps) hilly areas developed called moraines.

There are many moraines in Michigan and one rather large one divides our county roughly in half. Its southernmost boundary is quite visible as one drives on Old-27 near Adams Road with James Hill as one of the landmarks (see photo below).  In this general area the Saginaw lob of that final glacier rubbed up against the Lake Michigan lobe with both dropping glacial till in the form of rocks, sand and gravel, and gushing huge quantities of meltwater. To the south of the moraine and several hundred feet lower in elevation are Clare and Farwell. Atop the moraine are the communities of Harrison, Temple and Leota.  There is more to the story than just a difference in elevation. The soils are different with that to the south being less sandy and more fertile (see Soil story below).

Our lakes were included in the glacial formation, both the Great Lakes and our inland lands.  Many of the inland lakes were the result of great blocks of ice being dropped by the glacier, then being buried under tremendous amount of debris left by ice. Once the glaciers melted, the ice blocks too slowly melted under the glacial till leaving depressions filled with water in their wake.  How big were the ice blocks? Well, think Houghton Lake and closer to home, Budd Lake.

The glacial till is thick. According to S. G.Berquist, in his The Glacial History and Development of Michigan, the average depth of glacial deposits over the bedrock in the state is 300 feet. In other places, like in the western end of the Upper Peninsula, the bedrock remains visible and minerals such as iron and copper can be found because the glacier was not powerful enough to erode them. 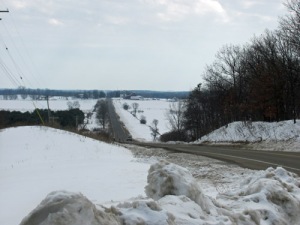 View looking south atop the glacial moraine at James Hill (Adams and Old 27).

Because the till left by the glacier are mixed, the deposits in many areas of our state are unstratified, that is mixed and lacking in layers. However, because the vast amount of meltwater issuing from the retreating glaciers carried sediment with it as it flowed, that water often sorted the till into various sizes such as cobble, gravel, pebble, sand, silt and clay, according to Berquist. That’s why we find sand pits, gravel pits and the like in our county and around our state.

So, the next time you take a drive or a walk, look around you and marvel at what God, nature and time has wrought.  Then pick up a rock and look at it carefully and take time to appreciate it.  After all, it traveled a long way to get to you. 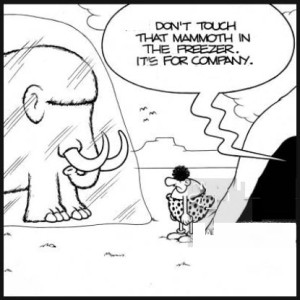 (Writer’s Note: Please let me know if any of my information is not clear or in error. I like geology and wanted to keep this brief and easy to read but I also want it accurate.)

Want to learn more about Michigan’s glaciers? Here are some resources:

The book the Soil Survey of Clare County, Michigan, published by the United States Dept. of Agriculture’s Soil Conservation Service (1978) graphically illustrates the soil types found in the county. Below is a map of the county and accompanying legend.

The approximate location of the glacial moraine (running northeast to southwest) can be discerned in the map below in the soil shown in yellow.  The legend descriptions of the soils in the northern section of the county generally include sandy in their definitions, while the soil to the south (designated by a 4) does not include that term.  Soil to the south of the moraine is generally more fertile.  One reason is that the lower elevations to the south were under water for an extended period of time when the glaciers receded due to the elevated levels of the Great Lakes and the forerunner to Saginaw Bay.

Colors show the various soil types found in the county. The soil to the south is more fertile owing to the fact the land below the glacier moraine was underwater following the glacier and gained additional nutrients. The red circle at the center shows the general location of James Hill.