Way back on June 25, I watched a painted turtle lay eggs on a sandy hill outside my window in Harrison, Michigan. I had never seen that happen before and I was enchanted and watched it from start to finish. I even took the female back down to my pond afterward so she wouldn’t have to walk all the way back. I wrote about it in the post soon afterward.

Then I waited. And waited some more. I knew it could take anywhere from 30-to-80 days for turtles to hatch (a lot depends on temps). Every once in awhile I checked the site but 30 days soon turned into 80, and early summer turned into late summer and still and nothing.

My cousin, who is a herpetologist (it’s good to have one of those in the family) told me at our family reunion on Labor Day to wait another couple of weeks and then dig up the nest and see what was there. She said that sometimes the female gets so scared when someone comes around while she’s laying eggs that she does not really lay them, just goes through the motion. 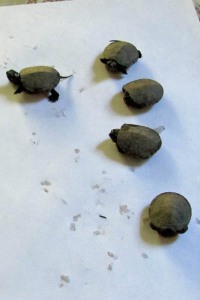 So I waited. And waited some more. And then on Sept. 22, I grabbed my shovel and dug. Carefully, hoping I wouldn’t chop any  eggs– or turtles–in half should there be any. I was not even sure what I would find. And after about four shovelfuls of dirt I hit paydirt. Or should I say a squirming mass of turtles about six inches down in the warm sand. Five turtles to be exact. Well, maybe six but I was so excited I could have lost one when I scooped them up. They were about an inch in diameter and the spitting image of their mom. Although they seemed happy at first to see the sunlight and me, they soon did their turtle thing and pulled back into their shells. I placed them down in the grass, then on the concrete and then in the house on the kitchen floor and took a number of photos of them. And then…well, I was suddenly at a loss on what to do. Maybe I shouldn’t have dug them up after all. Maybe they were getting ready to hibernate. Maybe they were now as good as dead because I HAD dug them up. Maybe I had sealed their death warrant.

I tried to call my herpetologist cousin but she was not available. So I decided to just let them all go. After all, the water was still warm, the sun was still bright and at the very least they could get a bite to eat (assuming they knew how and what to eat) since I was plumb out of turtle food.

So I took them to the edge of the pond on my property and placed them on a stick one-by-one at the water’s edge. And, one by one, they came out of their shells, launched themselves into the water and set off swimming as though they had been doing it all their lives. And then they were gone.

It was very cool. 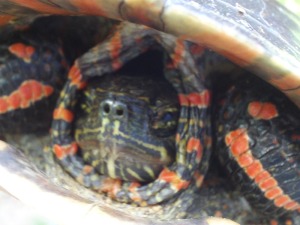 There are a number of advantages to living the life of a country squire–or that of an unemployed, soon-to-be divorced man living in the woods of mid-Michigan. One advantage is seeing a slice of life not available to those in the big city. An example is the painted turtle I spotted ambling across my yard Sunday, June 26 in search of a nesting site.

I have seen turtles on my property before (snappers for the most part), and have even seen turtles laying eggs, but until this recent Sunday I never had the opportunity or time to watch the entire process.

I spotted the turtle when I chanced to glance out the window while vacuuming a back bedroom. The turtle, about 6-inches long, was moving at a pretty good clip–maybe 30-feet per minute–across a sandy slope on my property about 50- yards from a pond where I presume the amphibian had emerged. As I watched, she moved in a zig-zag pattern, stopping every once in a while to dig for a few seconds with its front claws before moving on. Occasionally, she would even stay long enough in a spot to dig a shallow hole before deciding, for whatever reason, to move on.

The turtle was on high alert the entire time, sometimes stopping to raise her head high as if sniffing the air  or because she spotted some movement that might signal a predator.

Finally, after 15-minutes of searching, the turtle started to dig in an area of sand found between a few sparse patches of grass and a dandelion. She started with her front claws and switched to the back claws after getting a depression started. The turtle worked quickly tossing dirt hither and yon as she worked. This went on for another 10-minutes before she stopped 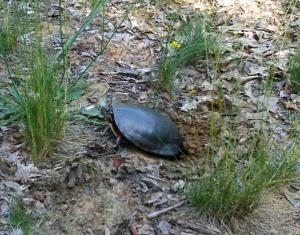 and lowered her backside into the hole and became relatively still.

Once the turtle started laying her eggs, I took my camera and walked out to her to take a photo. Her head turned to watch me with a look that almost seemed to be disapproval. I snapped a couple of photos and walked back inside. After a while, I became bored and went back to vacuuming, peering out the window periodically to see if she had moved.

After 45-minutes, the turtle began to move in earnest, kicking with her back legs but this time replacing the sand instead of ejecting it. I crept back outside and attempted to sneak up behind her, even going so far as to crawl on my belly to film the process. She spotted me right off (I make for a big target), and although she paused for a few moments she went back to burying the eggs as I filmed away.

When satisfied the job was complete and the eggs safe, she began to  amble in the direction of the pond. It was at that point I intervened and picked her up. I measured and  photographed her and even put the date on her bottom shell (plastron) using indelible marker before taking her to the pond and depositing her at its edge where she immediately dove into the water and disappeared.

I went back to the nesting site. The mother-to-be had done a great job or covering the burial site. In fact, had I not marked it when I picked her up to transport her to the pond, I would not have found it. However, the raccoons would have. And they seem to love turtle eggs because every year I find turtle eggshells scattered along the same slope this turtle used. (The above photo shows the remains of eggs along with a quarter used for scale.) To prevent the coons from getting to the eggs, I covered the site with a BBQ grate I will leave a for a couple of weeks, hoping by then the scent of turtle and eggs is gone and the site can remain inviolate until the turtles hatch. According to a couple of websites I reviewed that should happen in two- to three-months.

Ttime will tell whether the turtle will become a mother, although she will never know. Apparently what I saw is as far as the turtle maternal instinct goes. The babes will be on their own when they are born. Maybe I will be vacuuming and get to see them crawl forth. I hope so. That would be pretty cool. Maybe I can be turtle taxi and take them in the pond like I did with their mom.