A Cross at the edge of the Woods 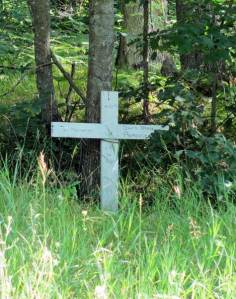 David Bruce Popovich died sometime early on Sept. 30, 1995 on Mostetler Road east of Harrison, Michigan. According to the Clare County Cleaver, Popovich was the sole occupant of  a pickup truck that went out of control at a curve on the gravel road and flipped over. Popovich, a self-employed auto mechanic, was 41. He left behind a son, Joshua, who lived in Pontiac, Michigan along with three brothers.

I never knew Mr. Popovich or had even heard of him until a month ago when I was riding my bicycle on Mostetler and spotted a two-foot high cross tied to a tree at a curve in the road at the edge of the woods. The cross was well made but its white paint it had peeled and the writing, what remained, was faded. However, the date of birth and date of death was visible along with the words “in Memory of” in neat lettering.

After visiting the Cleaver and learning about Mr. Popovich and the details of the crash, I wanted to do something about the condition of the cross so I went to the site, untied it from the tree and took it home. As I sanded it in preparation for repainting I found that someone had put a gold necklace with cross over the upright of the cross. I wondered who had created the cross and placed it on the site and who had put the necklace there and did they still think of David on occasion.

The cross has been repainted and  has is tied to the tree.  I added the wording that I saw on the cross when I first saw it along with the name of the person it honors, although the name may not have been there originally. Maybe others will see the cross, and maybe they will slow down at they approach the curve so no one else will suffer the fate of Mr. Popovich. But if nothing else, I hope it honors a man whose life  ended at the edge of the woods.

June 2018: I have repainted the cross for the 3rd time (last time was probably 2015) and reapplied the words. The wood making up the cross is getting pretty rotten and is soft in places. The cross doesn’t have many more years of life. The necklace is still there.  In addition, the property owners have cut a number of trees in the area but left the cross alone.

August 2020: I reapplied the words to the cross that have faded over the last two years. Necklace still there. The cross is holding up but not sure how much longer.  Wonder what ever happened to the son…

2 thoughts on “A Cross at the edge of the Woods”